"She seeketh wool and flax and worketh willingly with her hands"
Proverbs 31:13

Welcome to my blog! I created this blog to keep you updated on my teaching schedule, designs, new designs, kit availability,
works in progress and other stitching related activities. From time to time I'll also be adding extra info about goings-on in my life.

To see my current teaching schedule, teaching pieces and retired designs, click on "older posts" at the bottom of each page.

Thank you for visiting!

which many of you already know!  Inspirations Magazine is publishing a book of eight of my designs!!!  It will be released on October 24 and is already available for pre-order through many of our needlework shops.  You can order by going directly to the Inspirations Studios website,
Inspirationsstudios.com as well.  But don’t be put off by the price on the website as it will be listed in Australian dollars, and when the sale is converted to US dollars, the price will be much less.  The price listed for sale in our needlework shops is $39.95.  I will also be making copies available for purchase in my classes.

I’ve seen the final proofs and, as we would all expect, the staff at Inspirations did a wonderful job.  The photographs were made at two different farms and they are gorgeous!  I’ve always thought that they must photo-shop my work because it looks better in their photos than it does in real life, at least to me.  But they have assured me that they don’t do that.  They credit it to the very creative staff who “stage” the photos.  If you subscribe to their Friday newsletter you’ve seen some of their stylists and photographers in action - they are all so talented and it shows!

The book features 7 of my best known designs and also one brand new one which we’ve been keeping a secret.  I hope that you’ll like it and will want to jump right in and stitch it!  So, here’s the cover, but that’s all I can show you right now.... 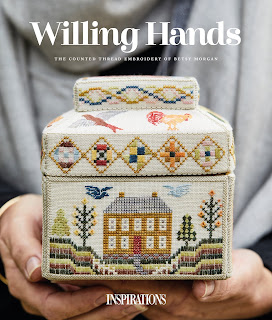 While I’m on the subject of Inspirations Magazine, I have a design in the current issue.  It is Maria Katarin’s Stitching Reticule - a design I originally did for Christmas in Williamsburg.  It is named for and is in honor of my adopted daughter who is half Mexican.  Her name is Mary Caitlin which, in Spanish, is Maria Katarin.  I chose the motifs and stitches which are prevalent on an 1844 Mexican sampler in my personal collection and adapted them for this design.

I have included photos from the magazine below.  If you’re interested in stitching this design from a kit, (I no longer teach it and don’t have supplies on hand to make kits myself.) there are still some available through the magazine at the website listed above. 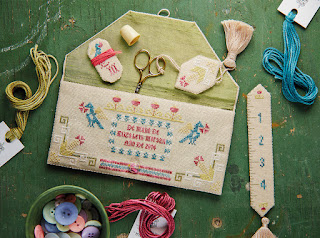 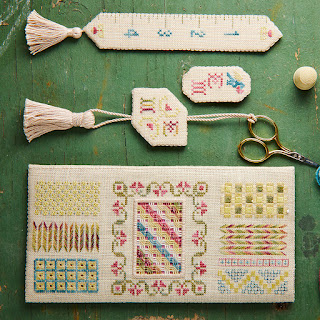 Betsy
I'm a wife, mother and businesswoman. I've been married to a great guy since 1980 and we have one daughter who is now 28 years old. I live near Charleston, South Carolina with 2 retired racing Greyhounds, a rescued Pit Bull and 1 formerly stray cat.